Skip to Main Content
It looks like you're using Internet Explorer 11 or older. This website works best with modern browsers such as the latest versions of Chrome, Firefox, Safari, and Edge. If you continue with this browser, you may see unexpected results.

About the Library: Library Mission and History

This guide includes information on services and policies at the OCCC Library.

Oklahoma City Community College’s Keith Leftwich Memorial Library will support the mission of the College through the following goals: Provide exemplary services that foster information literacy and enhance teaching and learning, and by developing, organizing, and maintaining resources that provide for diverse perspectives and styles of learning and that support the instructional programs, research efforts and social responsibilities of the College.

The Library actively supports the professional standards of practice adopted by the American Library Association and the Oklahoma Library Association. Those standards of practice are: ALA Library Bill of Rights, ALA Freedom to Read Statement, ALA Freedom to View Statement, ALA/OLA Intellectual Freedom Handbook, and Oklahoma Confidentiality of Library Records Law. The librarians and staff at the Library strongly support freedom of speech in accordance with the Constitution of the United States and following the guidelines of the American Library Association. The materials in the Library have been selected using well-established criteria; however, some materials may be offensive to some people. Any challenges to the inclusion of any materials will be judged according to our primary responsibility to intellectual freedom. 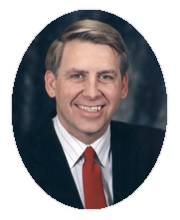 In 1990, Leftwich won election to the State Senate, representing District 44. He served as the Chairman of the Transportation Committee and Chairman of the General Government and Transportation Subcommittee on Appropriations, as well as being a member of Appropriations, the Business and Labor Committee, the Human Resources Committee, the Retirement and Group Health Committee, and the Rules Committee. He was a Majority Whip in the Senate.

Senator Debbe Leftwich said her late husband wanted others to enjoy reading as much as he did. “He was a virtual knowledge sponge. He knew knowledge was power. I hope this memorial serves to inspire students present and future to inquire about the man the library is named after.”

College President Robert P. Todd said Senator Leftwich advocated legislation that provided $6.2 million of initial funding for the construction of the College’s Library, which opened in 1996.

“Senator Leftwich continually sponsored legislation throughout the years that enabled Oklahoma City Community College to grow in service to its community,” said Oklahoma City Community College Board of Regents Chair Darrel Lanier. The legislative initiatives allowed the College to expand facilities, offer new and innovative programs, and increase the number of students it served.

Oklahoma State Senator President Pro Tempore Cal Hobson said Leftwich was devoted to South Oklahoma City and his friends, neighbors, and constituents, including the students at the Oklahoma City Community College. “Affixing his name to this library is a great honor and fitting tribute to one of the greatest supporters the College has ever known.”

Senator Leftwich served the people of South Oklahoma City for more than 21 years. He served from 1982-1988 in the State House of Representatives for District 91, and from 1990-2003 in the State Senate representing District 44.

The 109,000 square foot Library offers information services and computer resources for students and the community. The facility also houses the Division of Information Technology and Cooperative Alliances.